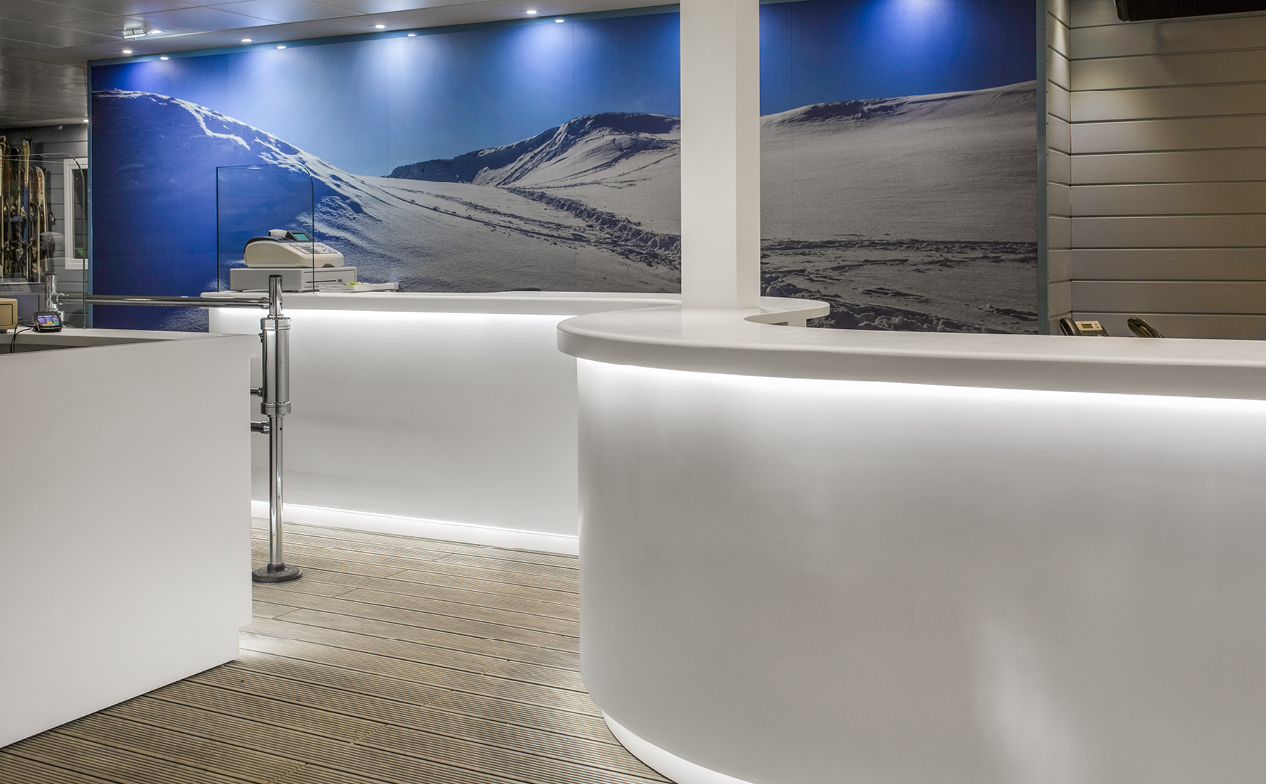 KRION K-LIFE at the Valdesquí ski station, an example of respect for the environment

Around this time of year, skiing enthusiasts look to the sky for good news indicating that they can practice this snow sport. Enthusiasts from Madrid and Segovia are 70 and 30km from the Valdesquí ski station, which has been established as a point of reference for leisure in the Central... Read more 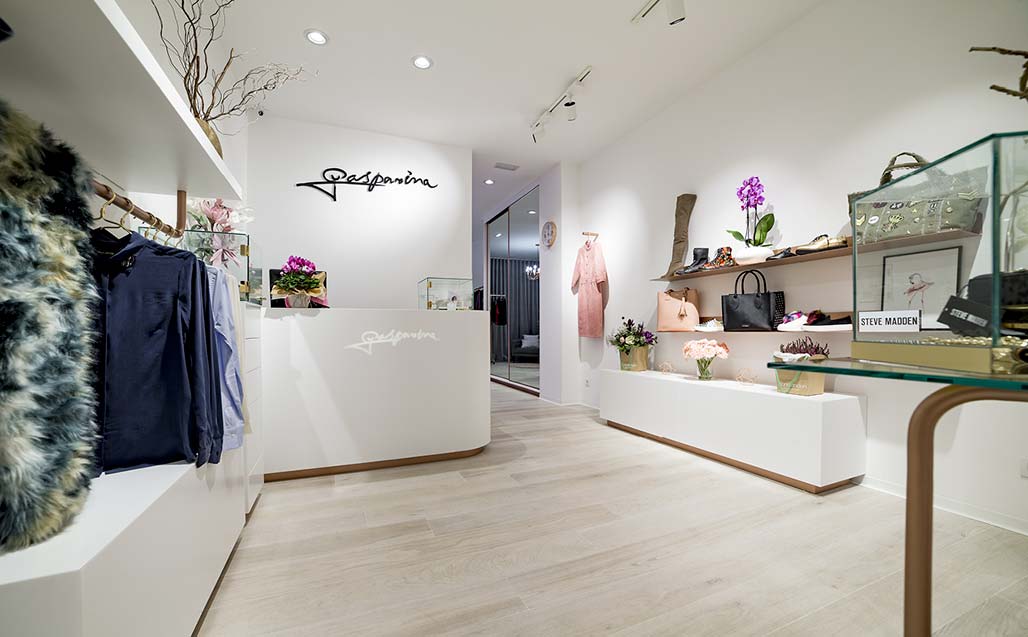 The creative team of Huuun has developed a minimalist design using the solid surface from PORCELANOSA Group, KRIONK-LIFE, for the Gasparina store on C/Alloza de Castellón (Spain). K-LIFE is beginning to improve our quality of life in a multitude of projects being developed at a global...  Read more 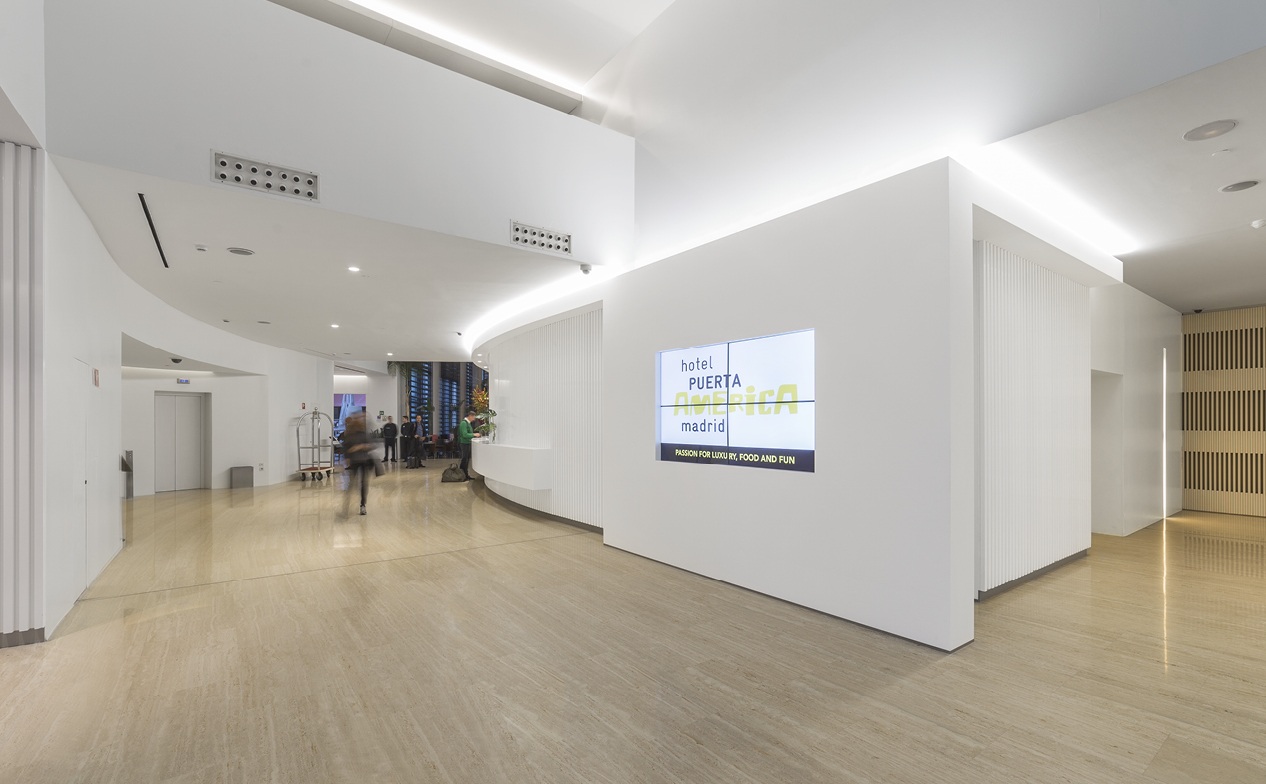 For all architecture and design enthusiasts, Hotel Puerta América in Madrid is a point of reference, a place of pilgrimage which awakens the senses. With 13 floors, with the only connection of the shared space as a canvas, some of the best designers and architects of this century have given... Read more 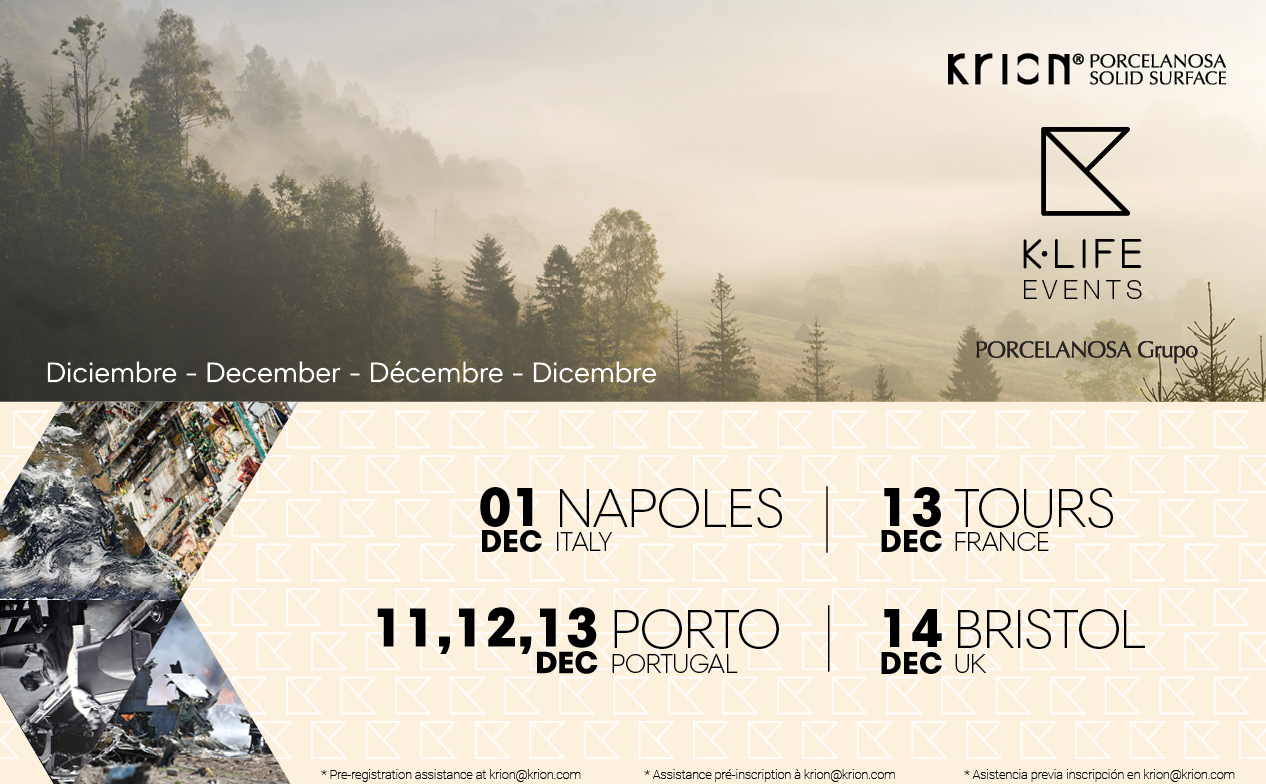 K-LIFE events continue in the month of December

We end the year with these four dates in France, Italy, Portugal and the United Kingdom, which will complete the 2017 presentations. However, there are still other places to present the revolutionary material from PORCELANOSA Group, KRIONK-LIFE. With dates closed until February, and the possibility... Read more 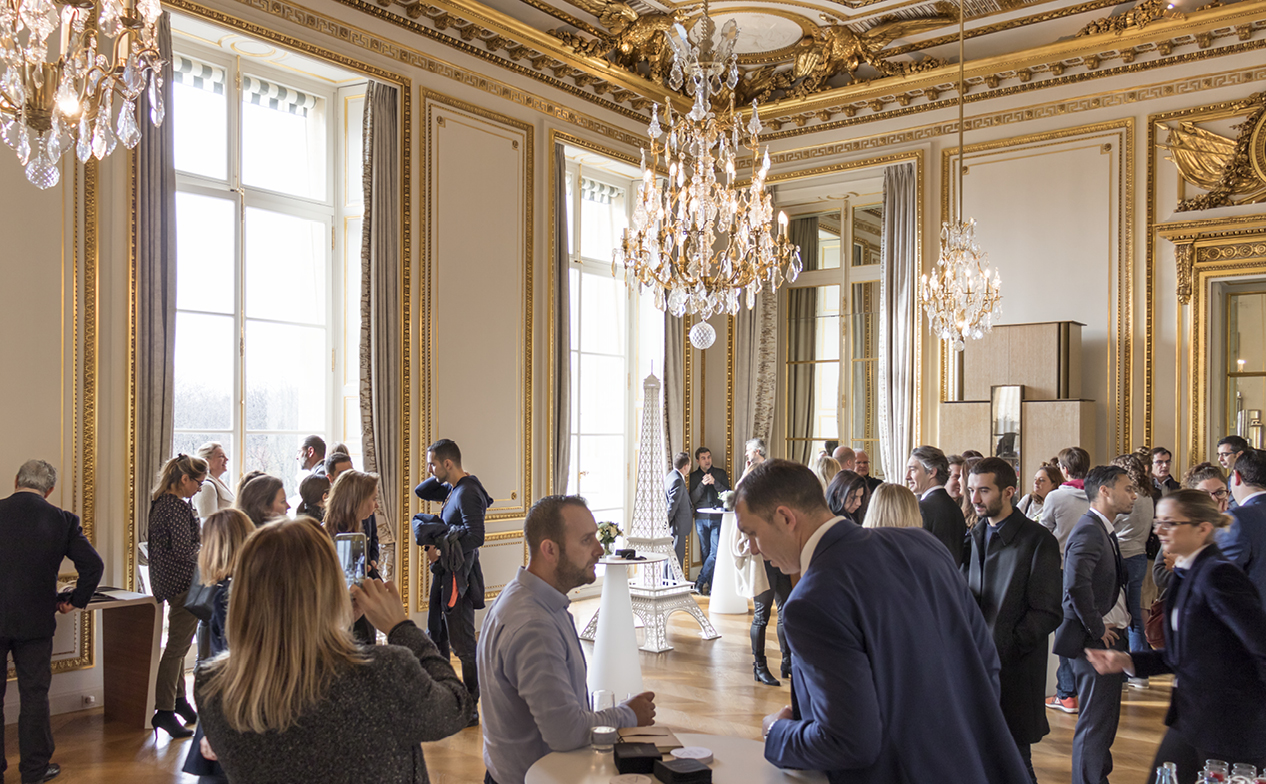 On Friday the 24th, PORCELANOSA Group presented K-LIFE at the majestic Hotel de Crillón, located in one of the most emblematic points in Paris, Place de la Concorde. With the best views of Paris, the new KRION product, K-LIFE, was presented, explaining the new properties of the material:... Read more 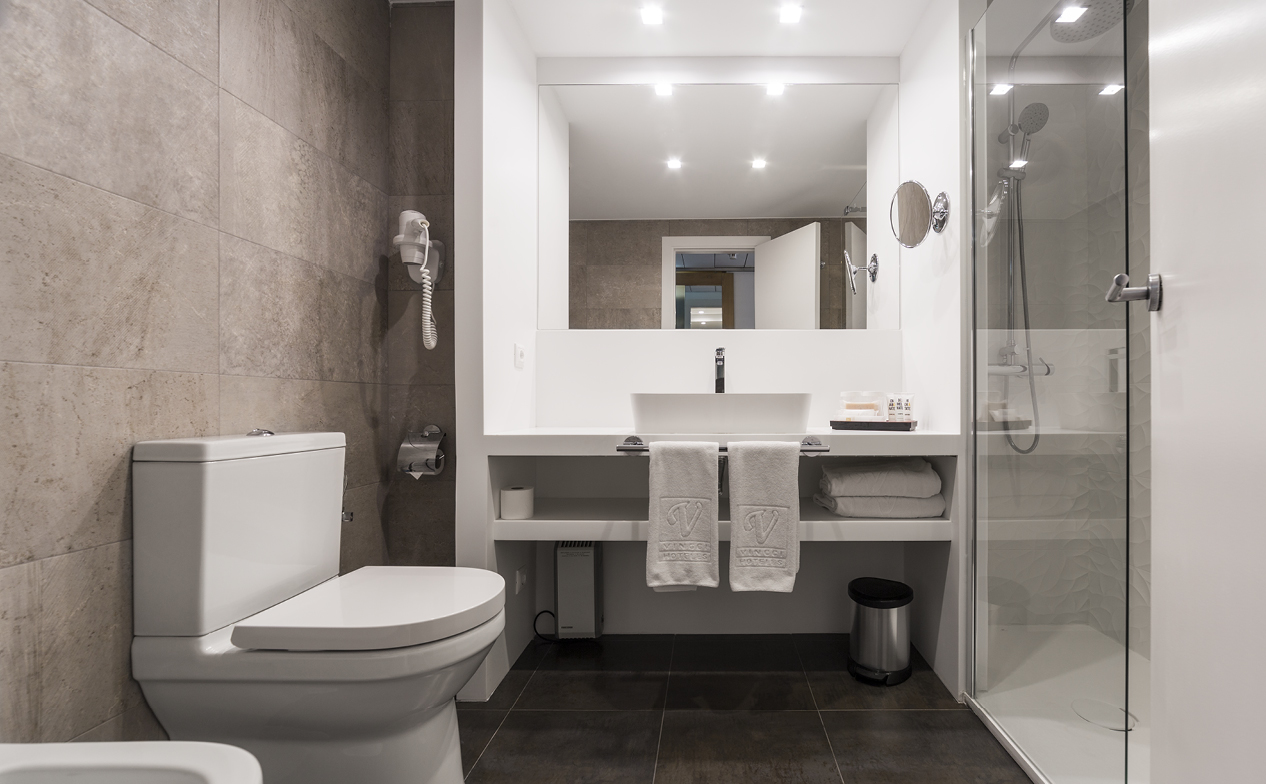 Projects with K-LIFE begin, with the full renovation of Hotel Vincci Soma

As in “Brave New World” by Aldous Huxley, where SOMA was the cure for day to day pressures, Hotel Vincci Soma is the perfect place to relax and forget about fatigue on both work trips and holidays. Now, KRION, the solid surface from PORCELANOSA Group, contributes to purifying the air of... Read more 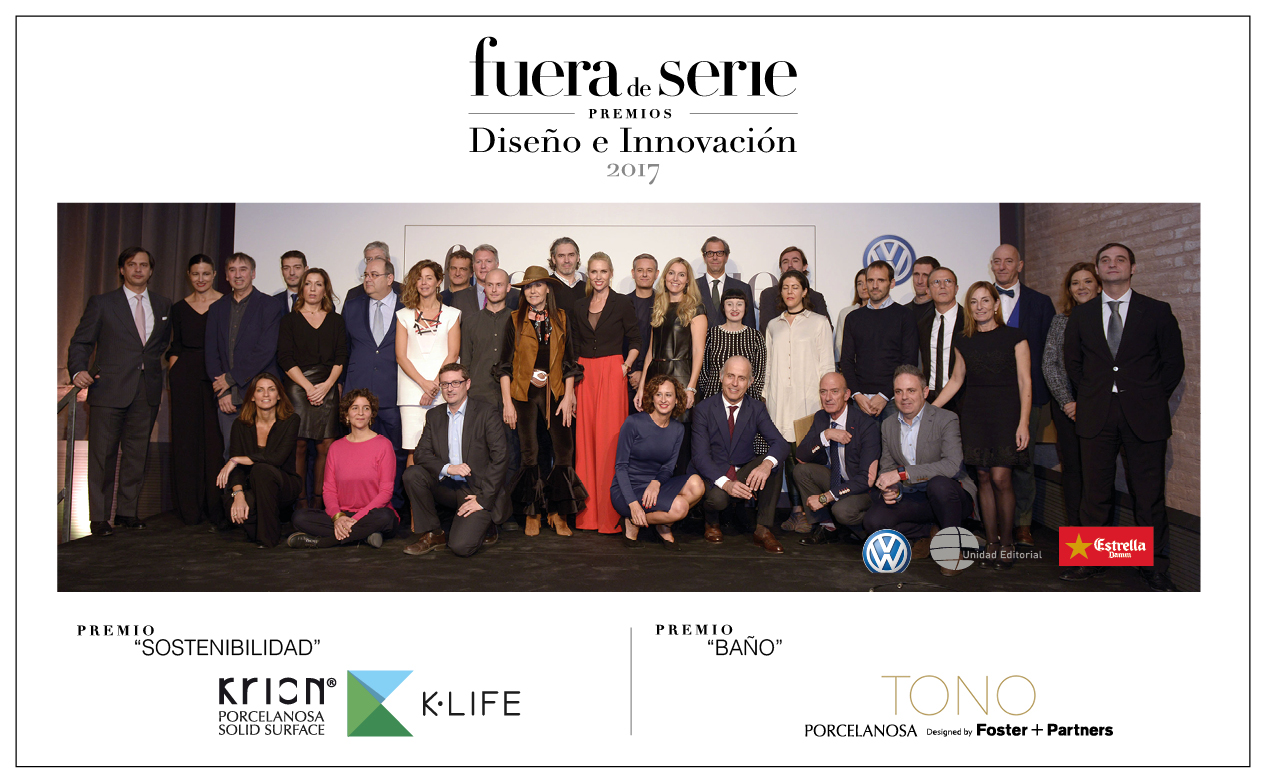 The awards of the Fuera de Serie magazine (the lifestyle supplement of the Expansión newspaper, also supplementing the El Mundo newspaper on Sundays next month), were presented on Tuesday the 14th in the Antigua Fábrica de Estrella Damm building in Barcelona. The judging panel of... http://bit.ly/2zLdPtG 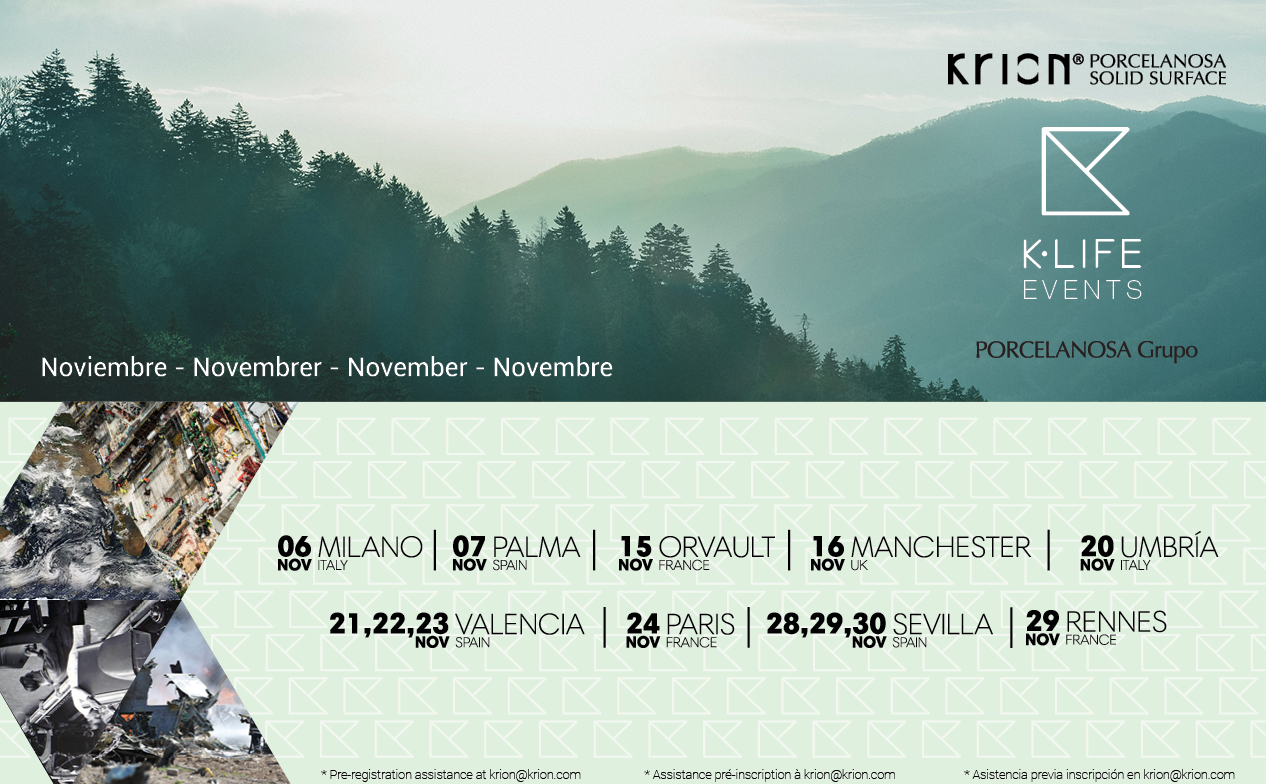 Spectacular launch of K-LIFE in October and new dates for November.A launch at a global level entails great logistics, nerves and the desire to reach the largest number of people possible with a clear message. In this case, the slogan “ PORCELANOSA #KRION will contribute to improving our quality of life” has travelled around the... http://bit.ly/2hyL7US 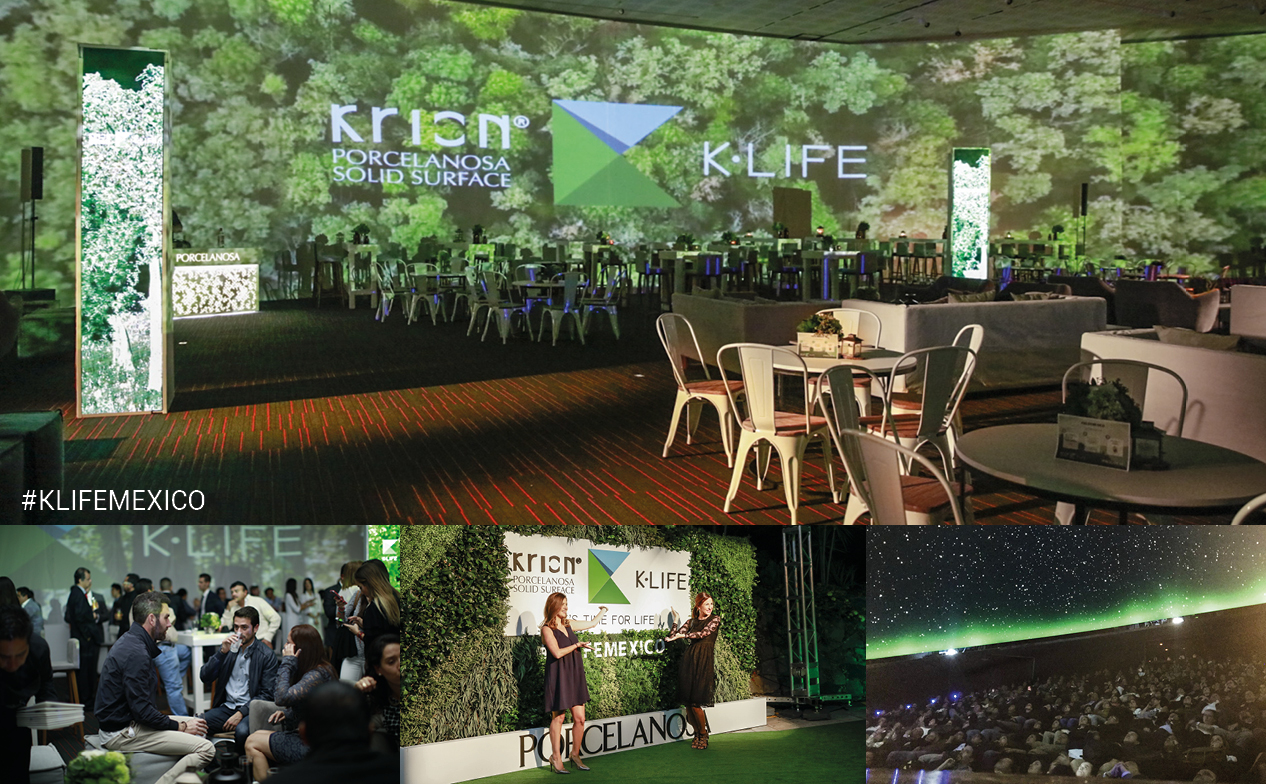 Last October 26th, Porcelanosa Mexico premiered its latest new material KRION® K-Life, with parallel presentations in Fulham, Miami and Bordeaux. This travelling event, with a strong emphasis on the senses, was held at the emblematic Papalote Children’s Museum in Mexico City, with more... http://bit.ly/2yW9VQa 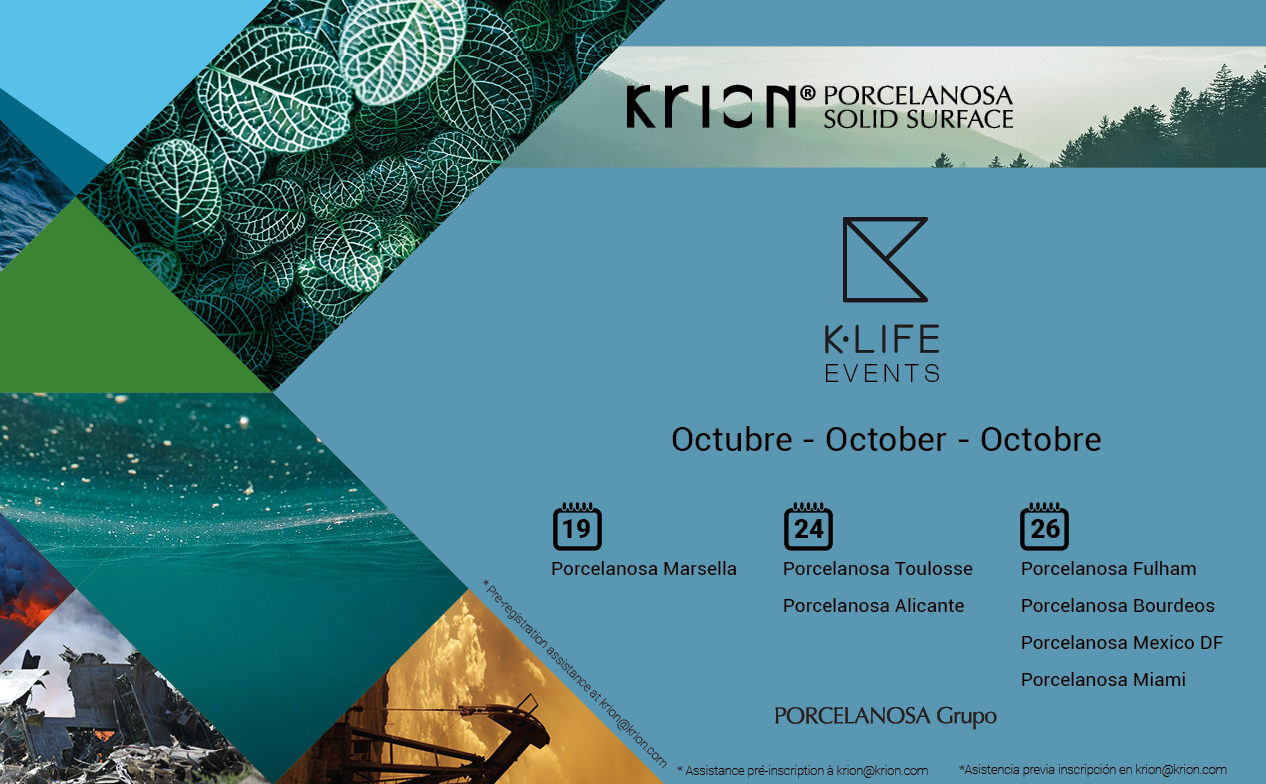 After Madrid and Barcelona having seen how KRION K-LIFE, the new solid surface from PORCELANOSA Group, contributes to improving quality of life, the tour of Spain continues in Alicante on the 24th of October. K-LIFE’s journey around the rest of the world will then begin. France: 19th...  http://bit.ly/2hF0EBY 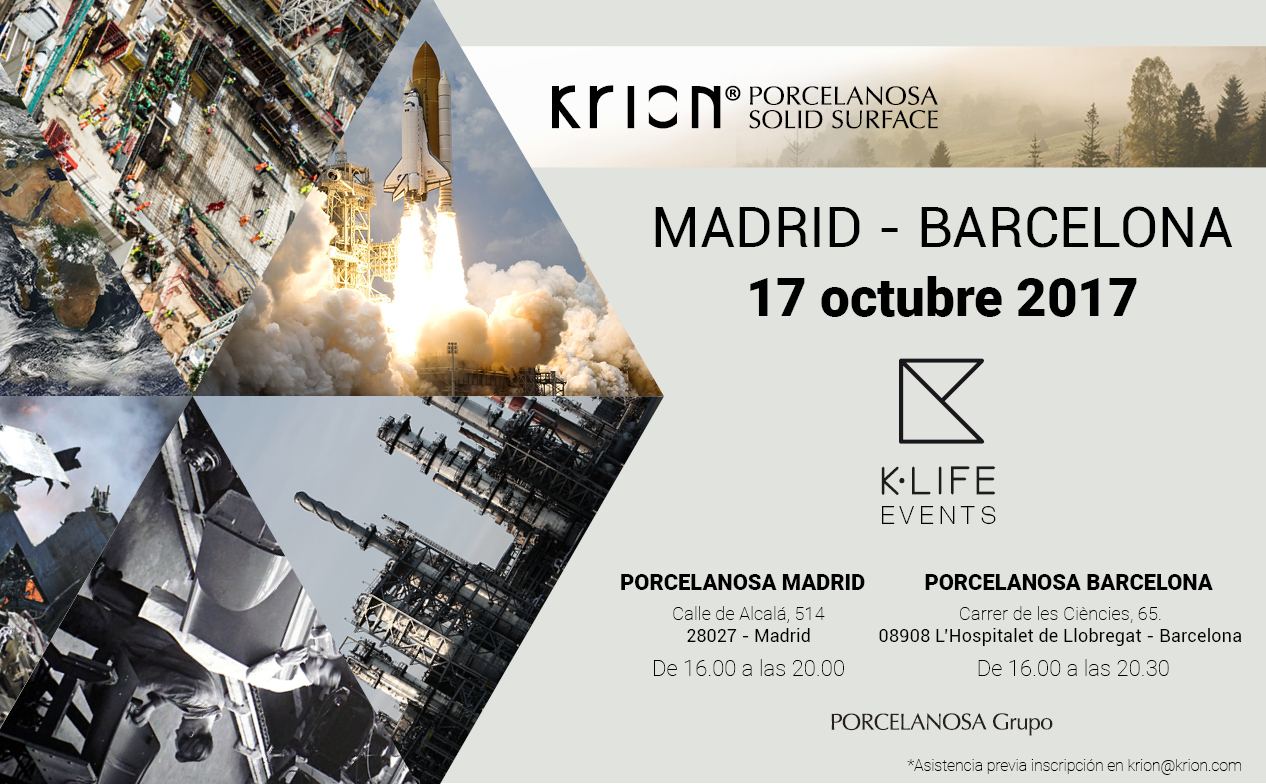 Following the global launch of K-LIFE, the brand is now coming to Madrid and Barcelona. Next 17 October, the PORCELANOSA premises in Madrid at Calle de Alcalá number 514 and near Barcelona in the town of L'Hospitalet de Llobregat at Carrer de les Ciències number 65 will be... http://bit.ly/2zTAkMS 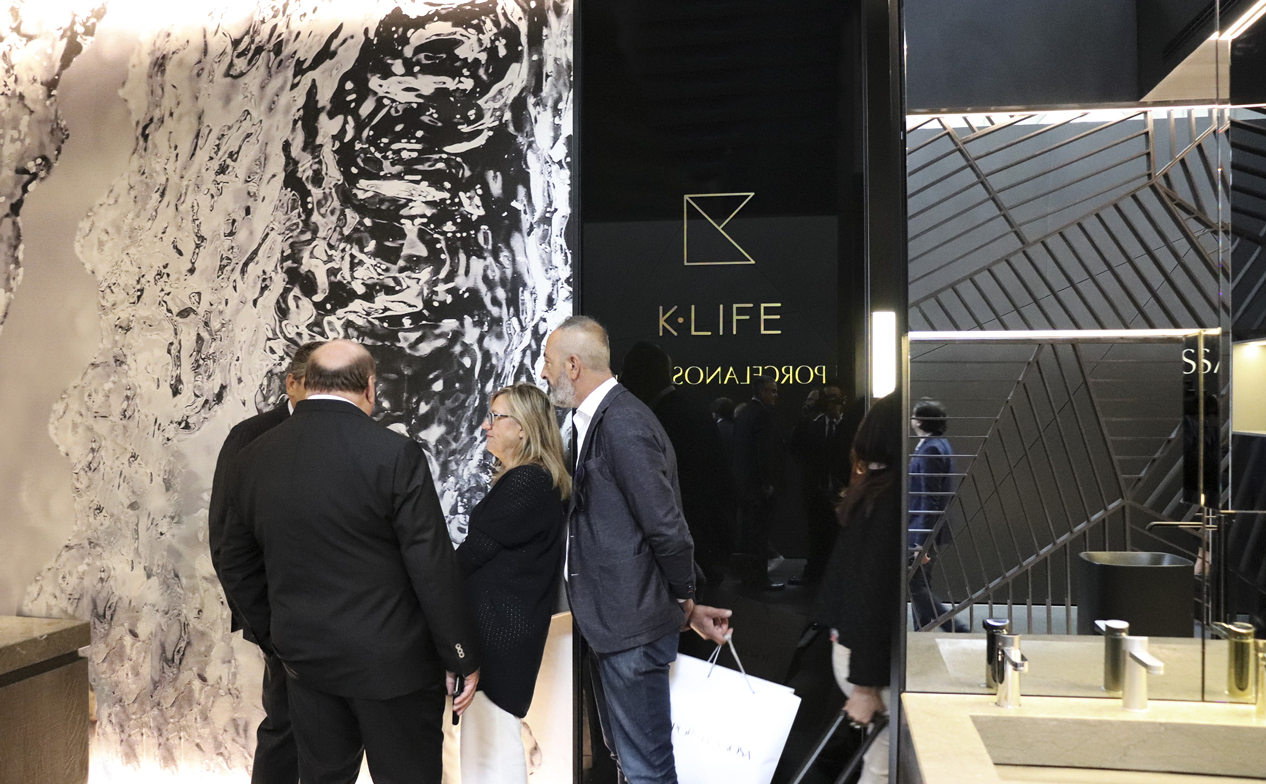 CERSAIE 2017 – Presentation of K-LIFE to the press in Bologna; and soon to the rest of the world

The new products involve a great deal of hidden work, a human team, studies and anticipation. We have worked hard on all of them, but if there is a new product that we feel particularly proud of, it is without doubt KRION® K-LIFE. Years of R&D with the sole intention of contributing to...   http://bit.ly/2yqFKx9 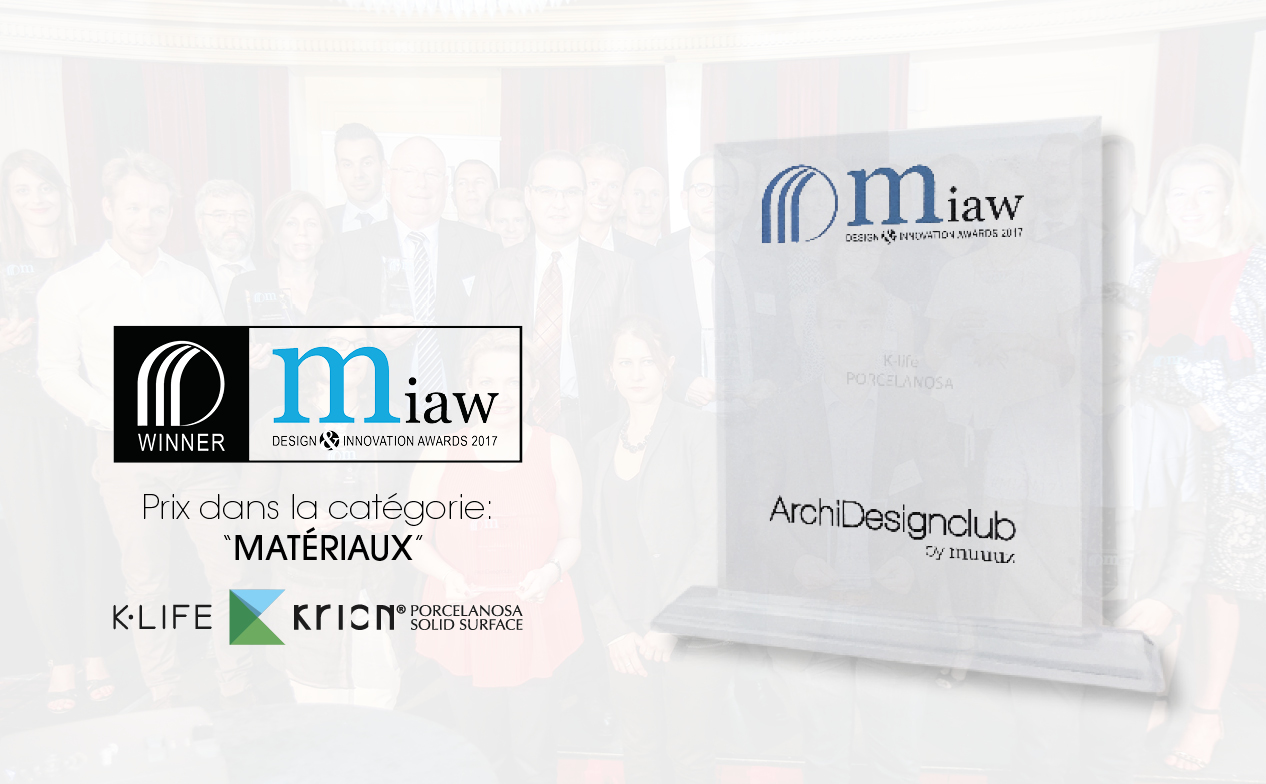 At the Grand Hotel InterContinental Opera de Paris on the 1st of June, the ceremony for the Muuuz International Awards (MIAW) was held, organised by ArchiDesignClub in association with the Muuuz D'A magazine. In its five editions it has awarded the most notable and innovative products in the world of architecture, design and decoration. On this occasion, the Solid Surface from PORCELANOSA Group, KRION® K-LIFE, won the award... http://bit.ly/2scOgQJ 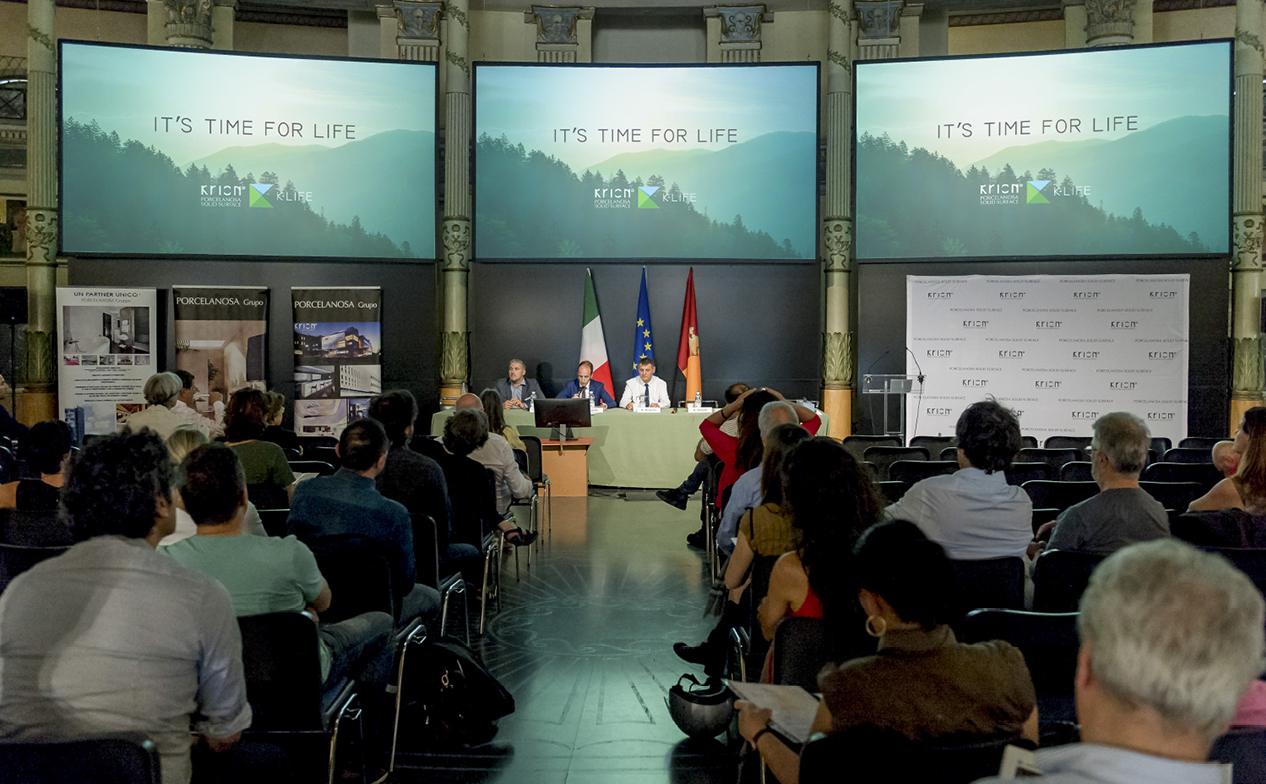 KRION® shows how it will contribute to improving our quality of life with K-LIFE, at the Rome Aquarium

On the 6th of June at the old Rome Aquarium, PORCELANOSA Group presented the worldwide release of its new material K-LIFE. The new generation Solid Surface from PORCELANOSA, KRION® K-LIFE, was presented in an interactive experience in order to convey the message directly, contributing to... http://bit.ly/2r6wIBo