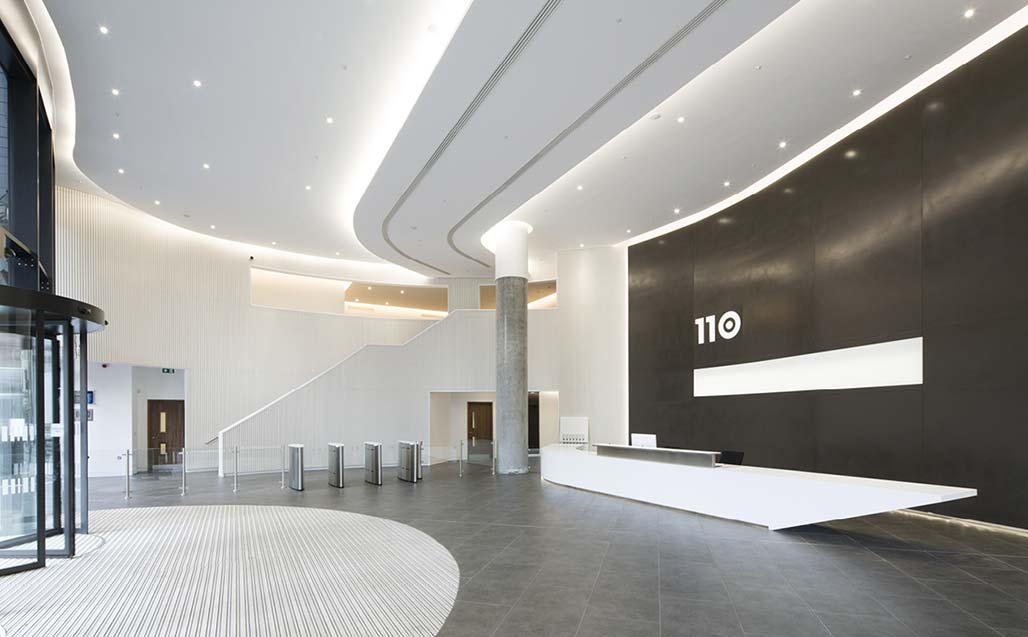 In the heart of Glasgow, the largest city in Scotland and the third largest in the United Kingdom, between Ingram Street and Queen Street, is the eight-storey, commercial office building, 110 Queen Street. Its glass façade reflects the neoclassical building that houses the  (GoMA) Gallery of Modern Art, and the equestrian statue of the Duke of Wellington, which was named one of the ten strangest monuments in the world by Lonely Planet Magazine, for having a traffic cone on his head, a joke that has become an icon of the city.

The building has materials from different companies of PORCELANOSA Group, among them KRION has renovated the city’s skyline. This work has been developed by BAM Properties, one of the ten companies of Royal BAM Group which are active in the business lines of construction and property. At present they have almost 20,000 employees.

In the hall of this building we find the solid KRION surface in its 1100 Snow White version, in the spectacular reception that takes on a curve to adapt to the space. The cladding of the walls in the form of shelves is also made with KRION, which together with the PORCELANOSAN flooring and the columns that span the room, bring elegance and added aesthetics to the overall effect. We find KRION in other conversions, such as finishing for turnstiles, and bathroom countertops.

The whole project carried out by BAMhas been awarded several prizes since its inception, including the Demolitions Awards 2013, for the complex demolition work of the old building, to the Scottish Property Awards in the Architectural Excellence Awards category (Commercial Buildings 2016).